Make no mistake ~ World War III has already begun.  Ten years from now, if there are any people still alive on the planet, they will wring their hands in anguish, wishing that someone had seen it coming in time to shift the march of events away from the unimaginable Armageddon that finally overwhelms our planet.  And if there are those who rejoice at the end of the world, expecting that now Jesus will come back in clouds of Glory, shepherding His Elect to their Heavenly reward ~ well, perhaps that hope will mitigate their pain as the Aura of the planet sinks down into the Black.

In my last three essays on this horrible war in Ukraine, I think I have had the right idea all along.  Reasonable diplomacy from the start could have stopped this whole mess in its tracks.  A few guarded analysts have mentioned the glaring fact that the United States really provoked Putin into this war by the inexorable Eastern march of NATO, in violation of clear promises to the contrary.  Putinĺs objections were stonewalled, and he was backed into a corner from which he was given no other option but to proceed with his threats.  None of this exonerates Putin from his egregious acts of madness and war crimes, but understanding the background makes it possible to see that, from Putinĺs point of view, ôhe had no other choice.ö  Nor has he any way of backing down from here without losing face.  (ôHa, ha.  My mistake.  So sorry.  Ha, ha.  My bad.ö  I wonder if thereĺs any truth to the rumor that there is a movie coming out about Putinĺs war, staring Pee-wee Herman as Vladimir Putin?)

Unfortunately, the brief window of possibility that this war could have been easily stopped has passed.  By now, after large parts of Ukraine have been reduced to rubble, including reckless bombing of civilians and hospitals, there is just no stomach for allowing Putin to march back to Moscow in triumph, bearing away the spoils of victory, laughing in his sleeve.  No ~ reasonable solutions that would have (or should have or could have) satisfied all parties at the outset are just no longer on the table.  Now the bleak reality is that Putin has no other option but to ôwinö this war at all costs, even if he has to escalate to bombing civilians and hospitals, further escalate to chemical or biological warfare, or go to the ôFinal Solutionö of the nuclear option.

But these are still early days.  If we want life on earth to survive, we must take action now to guide the evolution of this war into an endgame that allows life on earth to continue, and it isnĺt going to be easy.  As I see it, and as I stated in my last article (Restore the Tsar !), the only hope for derailing Putinĺs war is regime change.  That is not necessarily an impossible objective.  Russia has been very rapidly descending into financial, ethical, and social chaos.  The sanctions are hitting hard, leading some commentators to suggest that a default of Russiaĺs financial obligations could be imminent.  The ruthless and bloodthirsty invasion of Ukraine has caused Russiaĺs world standing to plummet to the depths, and the people of Russia, in spite of authoritarian pressure taken directly from the pages of George Orwellĺs 1984 have realized the appalling atrocity of Putinĺs ôspecial military operationö and are protesting in large numbers, risking arrest and imprisonment for their heroic refusal to remain silent.

What all of this means is that Putin cannot long sustain his monstrously unpopular war (nor can he long sustain the pretense that it isnĺt really a war at all).  In order to force Putinĺs nightmare to crumble, maximum pressure must be maintained at every point, without letup.  If Americans are unhappy about the current price of gasoline (I just paid over $6 a gallon to fill my tank here in California, and thatĺs already out of date, yesterdayĺs news), let them ride bicycles, as I have been advocating for years [Physician, heal thyself ~ yes, touchÚ ~ but I live in the mountains up a very steep road, thirty miles from the nearest town].  Closer to the fray, in Europe, the effects are more severe ~ if the Europeans heat their homes with gas or oil, let them turn off their furnaces and huddle with their loved ones, wrapped up in blankets, waiting for the end of this war.  This IS war, after all ~ would you rather see nuclear bombs dropping from the sky?  And, hardest hit of all, of course, are the Ukrainians themselves, enduring unimaginable horror as their beloved country is systematically destroyed.  In parts of Mariupol they have no other option but to eat dirt and drink dust, while trying to explain to their children what is happening, and why.  They keep asking for a No Fly Zone in the skies above Ukraine, but that, of course, means that they are asking for the United States and Russia to engage in a direct military conflict, which would certainly escalate, first to ôtactical nuclear weapons,ö and finally to the haymaker, the quietus, as they sing a requiem Šternam for the dying planet.

For the moment, at least, cooler heads prevail (and, as at least one commentator remarked, ôThank God Donald Trump is not our President now!ö).  No, the solution to this war is not more firepower, but economic warfare.  Russia should be prevented from selling one drop of oil or a cubic centimeter of gas, no matter how stark the suffering at the dry end of the pipeline.  Just remember that if no oil or gas is flowing down the pipe from Russia to Europe or the rest of the world, neither is any money flowing back on that parallel pipeline that carries dollars and euros back to Russia.  Keep the thumbscrews tightened to maximum pressure until finally Putin blinks.  Thatĺs the way the Kremlin crumbles. 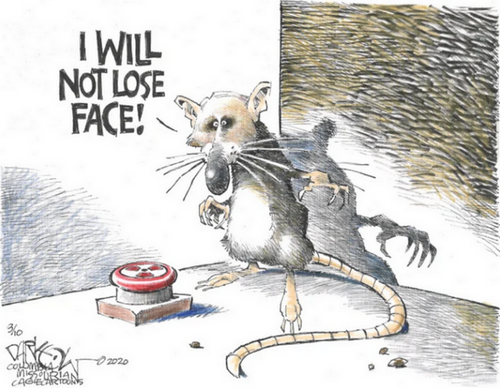