Other people are beginning to notice that the world as a whole, and the United States in particular, is falling apart.  I see it in abstract terms as the whole world engulfed by a descent into chaos.  The colors of the Aura are darkening from Orange into the ever darker colors of Red and Purple, forming the image of a whirlpool spiraling down into Black.  The prognoses for the future of these patterns of energy are not good. 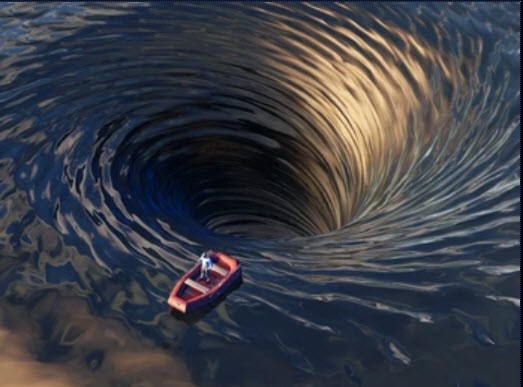 This is what the visionaries have been warning us about for many years, but the Future is finally here.  Now the only hope for survival is radical change back to the higher energy of Orange, on the way up to the Blue and Green in the distant future.  Otherwise, it just gets worse and worse, falling apart as it goes down.  Inertia is against us, so we must seize the reins of this runaway horse and guide it back to the path before it falls off the cliff.

So, during these very trying times, it is too bad to see the decision making process hinging on two very bad economic fallacies.  The first one is most regrettable.  It is the inevitable axiom that “the sitting President takes the fall” during hard times.  Such has been the case throughout ten thousand years of history, but it is based on a primary misunderstanding.  The problem is that whenever an administration expresses a Policy of any kind, whether financial or anything else, it will usually take about twenty to thirty years before the effects of that action will be evident.  Thus, sitting Presidents suffer for their predecessors’ mistakes, going back many years, yet any benefit from better policies will not be seen for another generation.

But the second common fallacy about economics has to do with the effects of inflation and debt.  I thought I clarified this whole issue some time ago (Solution to the Question of Deficit Financing), but some people haven’t noticed.  This is particularly insidious right now as President Biden is trying to get some important spending initiatives going on in the face of a headwind of inflation.  Everyone seems to think that with Inflation becoming more of a problem, then massive spending is going to just drive us all over the edge.  But it doesn’t work that way at all.  Spending money generates prosperity, as long as the money is spent in “high expected return factor projects,” to use the terminology of the previous article.  Spending money that just promotes useless waste is just flushing that money down the toilet.  The more money is wasted instead of being spent wisely, the more the economy collapses and inflation supervenes.

So all the wrong questions are being asked in Congress these days.  Instead of asking what something will cost, ask what will that project produce in return? The faster money is spent on good projects, the faster an economy will prosper.  So, staggering around, afraid to spend any money, is not the answer here.  There is so much that needs to be done, so let’s do it.