No one seems to be getting it yet ~ high gas prices are the only way it’s going to go forward.  That’s what Climate Change is all about.  Shutting down fossil fuels isn’t going to be easy ~ the obvious consequence is that the price of oil will be going up, pricing itself out of use.  It will be most heavily taxed, so that, like coal, it will just stop being used.

At a certain point in the explosion of the human race in population and technology, the deleterious effects of its presence on the earth exceeded the capacity of the earth to absorb it, leaving severe effects on its biological balance and climate.  Human life on earth will have to voluntarily release the earth from its grip, and allow it to grow back to life.  It is People who are responsible for disturbing the biological balance of the planet.  Either the human population of the earth will have to be very greatly reduced, or they will have to change their ways.  They have to pull back in a great many ways, and help the earth to grow back.  The long historical slide of cutting down Trees to make way for more People, has got to reverse ~ it is people who will have to give way for the trees.  If they want to remain on this planet, along with the Trees, they will have to work on their part of a symbiotic arrangement.  If people would take care of planting and maintaining Trees wherever the earth is insufficiently covered, then those Trees will repay that effort a great many times over.  The Trees will take care of our planet, if we take care of our Trees.

It is not very comforting to hear that “the rate of deforestation is slowing down” when what we need is a world-wide Tree Planting Jubilee.  In the midst of this planetary crisis, I cannot understand how people in Brazil are allowed to just burn and pillage the last holdout of Trees on the planet.  Wrong, wrong, wrong.  We are living in the Garden of Eden.  And this is what we have done with it.  If the planet be seriously cultivated as a garden worldwide, it should grow back to health within a millennium, give or take a few centuries.

So when I read about how everyone is up in arms about the rising price of gas to feed our restless feet, I can only think that right here is the nexus of the issue.  It is appallingly wasteful for people to burn off millions of years’ worth of accumulated organic process residue as fuel to run their cars around, and to fly around the earth in airplanes.  One or two generations witness this consumption of the planet’s biological heritage, and then it is over, and the value of the remaining organic carbon residue on the planet will be far too valuable to be burned off as fuel.  The last couple of centuries have sacked the organic heritage of our planet, and left it in ruins.  It remains to be seen whether or not future generations will be able to keep the flame of life alive on this planet.  We are very much poorer without the Trees, and soon we may not even have much of the oil left over from their memory.

The transition to electric vehicles will happen as fast as the transition away from incandescent light bulbs.  Cars running on the internal combustion of gasoline will soon join the Retirement Museum along with vinyl phonograph records and other curiosities.  So, get used to it ~ the price of gas, the price of meat, the price of a ten minute joyride into space ~ it’s all going to go up.  And the electricity to run all those electric cars and trucks and busses is going to become very expensive for the foreseeable future, until they are able to roll out enough windmills and solar farms to keep up with the demand.

The best solution for personal locomotion is to ride a bicycle. 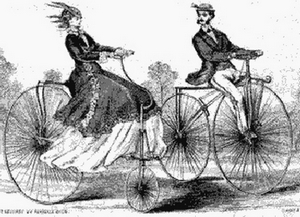 I had an idea of imagining a cost value for everything, much as they calculate carbon costs.  Cement is wonderful stuff, but it turns out to have a very high carbon cost.  If you could come up with a calculus for the total cost of anything, bicycles would come in with one of the highest negative cost numbers.  First of all, the cost to produce a bicycle compared with the number of miles you can cover with it, and the value of its use, is negligible.  But when the value of the health benefits shows up largely on the other side of the ledger, it turns out that it costs a whole lot less than nothing to keep and ride a bicycle.  Compared with this, the total cost per mile for an automobile, counting it’s construction cost, operating and maintenance costs, consumption of gas and oil, and factoring in its environmental cost, would be stratospherically higher.

I have already suggested to Elon Musk that he invest in the development of hybrid-electric sailboats, powered by any configuration of solar, wind turbine, battery, sailcloth, or dancing Indians, depending on the weather.  As soon as airplanes are grounded, our electric wind-up boats may inherit the market for trans-oceanic travel.  But I guess he gets too many such suggestions to take much notice.